Pigeons are incredibly complex and intelligent animals. They are one of only a small number of species to pass the ‘mirror test’ – a test of self recognition. Here are some amazing facts about pigeons!

Columba livia (‘dove’ or ‘bird of leaden or blue-grey colour’)

The wild pigeon is found in coastal areas and the feral pigeon is found almost exclusively in areas of human habitation. Worldwide except Sahara Desert, Antarctica and the high Arctic. European population estimated at between 17 and 28 million birds. Amazing Facts About the Pigeon 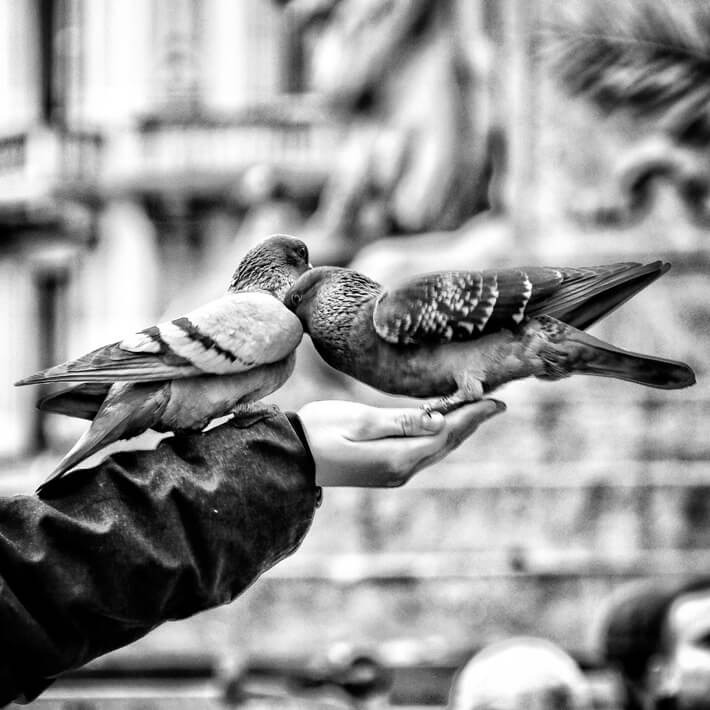 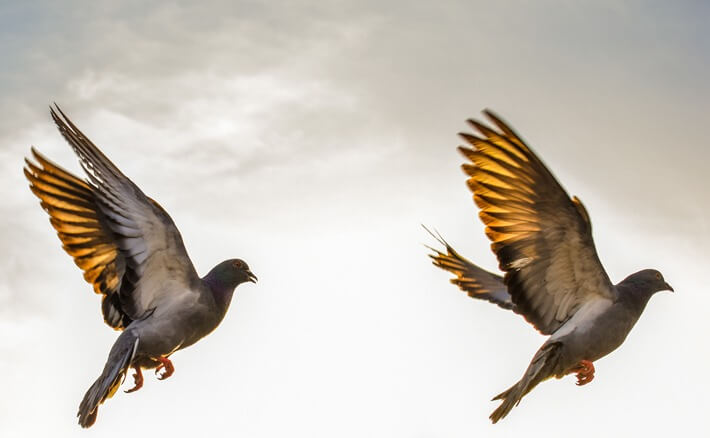 Domestication of the Rock Dove

The first mention of the domestication of the rock dove was found in Mesopotamian cuneiform tablets (pictographical writing on clay tablets) dating back over 5000 years. However, it is likely that rock doves were domesticated by Neolithic man as far back as 10,000 years ago in and around the alluvial plains of the Tigris and Euphrates.

It was at this time that Neolithic man was starting to cultivate cereal crops and domesticate animals for food. In pre-history it is likely that rock doves lived alongside man in caves and on cliff faces.

Images of pigeons were first found on the reconstructed façade of an excavated temple dedicated to the goddess Ninhursag (Queen of Heaven and Earth) at Al’Ubaid in Sumeria in 3000 BC. Many more clay images of pigeons have been found during excavations of sites in Iraq and Crete dating back to 3000 BC.

During the excavation of an Egyptian tomb in 3000 BC, the bones of pigeons were found in what is thought to have been the remains of a funerary meal. Although images of the pigeon have been found dating as far back as 3000 BC, it is not clear what role the pigeon played in these ancient civilisations and to what extent the bird was domesticated.

Later, in 1100 BC, King Rameses III sacrificed 57,000 pigeons to the god Ammon at Thebes, confirming that the pigeon was well on the way to being domesticated not only for food but also for religious purposes. Mention of pigeon sacrifices can also be found in both the Old Testament and the New Testament. 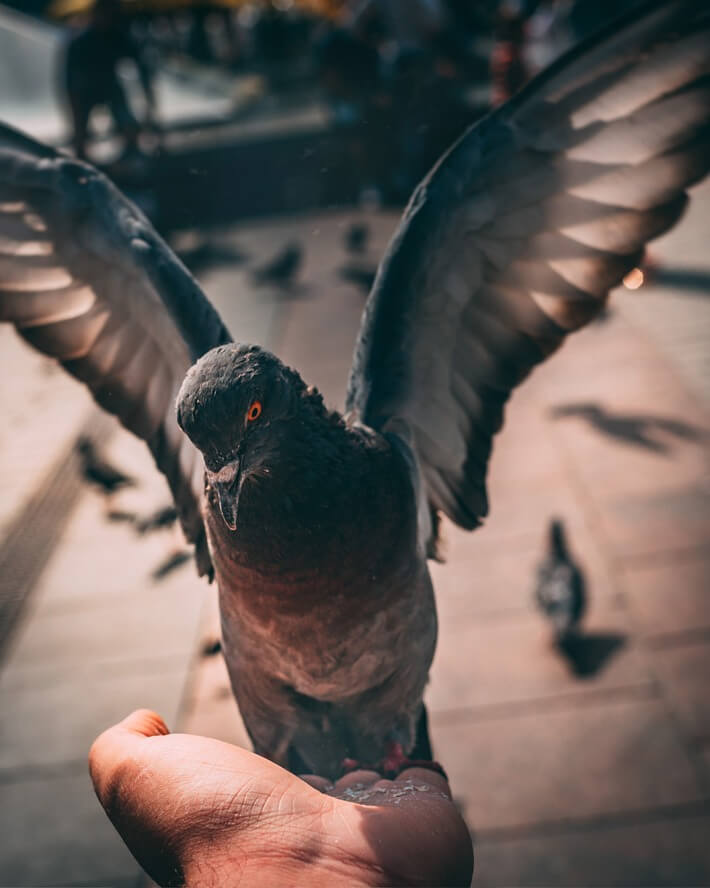 The pigeon is probably best known for its ability to return ‘home’ from long distances and has been used extensively by man for this purpose. The earliest reference to the pigeon being used to carry messages dates back to 2500 BC and the tradition has continued throughout history.

The Romans and ancient Greeks used the pigeon extensively for carrying messages and the first sophisticated messaging service was established in Syria and Persia in the 12th century AD, with messages being carried by pigeons from city to city.

Later, in the 19th century, the pigeon was used for commercial purposes, carrying messages for financial institutions and news agencies in Europe and even providing an airmail service in New Zealand. In the 20th century, pigeons were used extensively in both Great Wars to carry messages, and as a result of their bravery and heroism, tens of thousands of human lives were saved. The last messaging service using pigeons was disbanded in 2006 by the police force in the city of Orrisa, India.

Dedicated pigeon houses, or dovecotes, were believed to have existed in very early times in southern Palestine and later in Egypt in 44 BC.

However, a detailed and well-preserved Roman mosaic dating from 200 BC shows a dovecote with a thatched roof in which there are numerous flight holes with pigeons perching both on the roof and flying above it. This confirms that the pigeon was being bred in dedicated facilities over 2200 years ago.

The Sicilian historian Diadorous, writing about the period circa 300 BC, also described a mud building with a reed thatched roof that was used to house domesticated pigeons, further confirming that organised domestication had been established in this period.

The dovecote has played an essential role in the domestication of the pigeon throughout history, with facilities ranging from extremely crude early examples in the form of basic clay pots through to highly ornate detached buildings housing many thousands of birds in the 17th, 18th and 19th centuries. Pigeons were housed and bred within these structures for food, their excrement (which was used as fertiliser and as an ingredient for gunpowder), sport and as messengers. The tradition of housing pigeons in man-made structures continued until the 20th century and is described in more detail in the Dovecotes article.

The pigeon was domesticated not only for its ability to return home and as a source of food and by-products, but also for the purposes of sport. Man has found many sporting uses for the pigeon throughout history, with the earliest known example being the sport of Triganieri. It is unclear when this ancient sport first started, but the early Greeks and Romans are believed to have participated in it.

The sport involves each participant using captive pigeons, released from several pigeon lofts or dovecotes at the same time, and to lure as many birds as possible away from adjoining lofts using specially trained pigeons. The captured birds were either killed or held for ransom. This sport has continued through the centuries and is still played today. In the Turkish city of Urfa the sport involves over 500 flocks in a single event.

Other sporting uses for the pigeon included the use of falconry, known as the ‘Sport of Kings’, where both domesticated and wild pigeons were killed for sport. The sport is believed to have started prior to the 10th century AD. At the end of the 17th century, with the advent of the shotgun, falconry dwindled in popularity, but a new, more deadly sport took its place – pigeon shooting. In the Middle East, domesticated pigeons are still used today as bait for falconers. Organised pigeon shoots started in the 18th century where huge numbers of domesticated birds were released and shot at point-blank range. Incredibly, the sport continues today in the USA where huge numbers of feral pigeons are cage-trapped by unscrupulous pest controllers and netted by illegal gangs and then sold to shooting clubs. The birds are then released in front of shooters, many with semi-automatic weapons, and shot at point-blank range.

Probably the most common use for the domesticated pigeon today is pigeon racing, a sport that is popular in virtually every country in the world. It is not known when pigeon racing for sport first started, probably in very early history, but pigeon racing as we know it today first started in Belgium in 1850. The sport grew in popularity and peaked in 1960, when there were 170,000 pigeon fanciers in the UK alone. Today the sport is in decline, but pigeons that are considered to be good breeding stock can exchange hands for as much as £65,000. Gallery image with caption: 10 Commands Your Dogs Need to Know